Land of the Rising Sun

The sailing has departed. See our Featured Trips page for your next journey details!

Onboard a mid-size ship, explore ports in the most fascinating corners of the globe. This itinerary is one leg of a series of voyages around the world. The itineraries are visited once - so this is a go now or miss out itinerary! 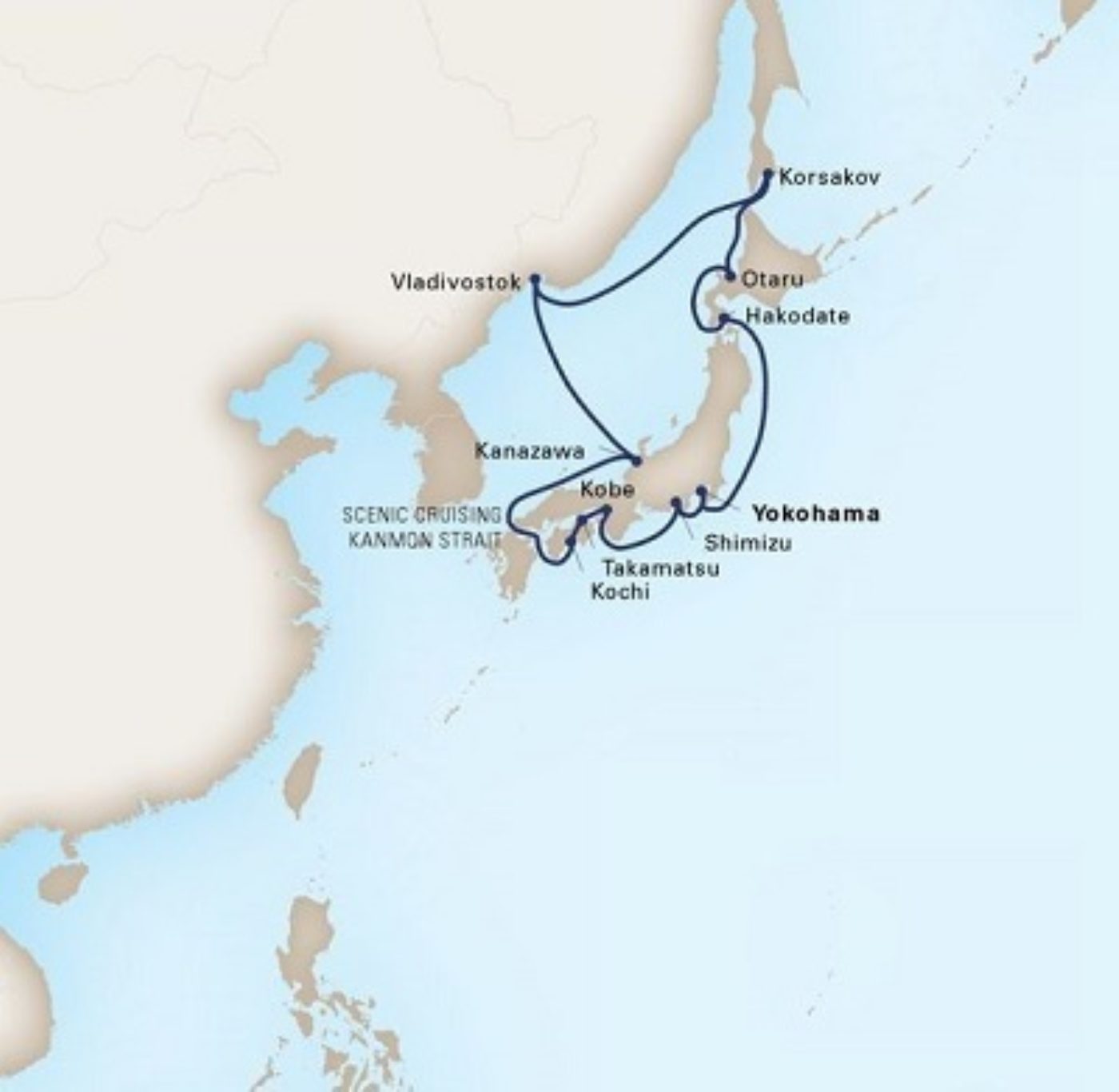 Until the mid-19th century, Japan lived in isolation, closed off from the rest of the world, and Yokohama was a mere fishing village. But in 1853, American naval officer Matthew Perry demanded the country open to foreign trade, and Yokohama was changed forever. The city quickly emerged as an international trading center, and while today it is often overshadowed by nearby Tokyo, it continues to be one of Japan’s liveliest, and most international, destinations. With its microbreweries and international restaurants, Yokohama has a decidedly different feel from many other Japanese cities.

Widely regarded as one of Japan’s most beautiful ports, Shimizu affords peerless views of Mount Fuji on a clear day and claims the scenic Miho-no-Matsubara pine forest as a backdrop (both are UNESCO World Heritage sites). The port’s temperate climate and rich culture—heavily connected to the surrounding Shizuoka region—have made it one of the country’s prime sightseeing destinations. A few of the main attractions include Kunozan Toshogu Shrine, designated a National Treasure by the Japanese government, Sumpu Castle (built in 1586) and Shizuoka Sengen Shrine, where warlord Tokugawa Ieyasu, who ushered in the Edo period, held his coming-of-age ceremony. Tokugawa shoguns ruled Japan for 250 years, until 1867.

Visit the birthplace of Kobe Beef! A farmer was looking at his cow, thinking, “What possibilities of perfection am I missing?” Cows were still a new thing in the 20th Centure; they were banned as food almost until WWII, so cow rules were in flux when this farmer began massaging his herd with sake. The cows got pleasantly drunk on local beer and listened to classical music—and in return for the pampering, they produced, and continue to produce, heavily marbled, melt-in-the-mouth cuts of meat that can easily sell for a hundred bucks a dish. Like everything else in town, Kobe beef is all in the details.

Take part in the onboard enrichment programming. When you arrive at your next destination you can take the 'field excursion' for your program. 6 themes are available:

While in Kochi take the day to explore the preserved fuedal castles and visit the local markets.

The Kanmon Strait is a narrow channel of water that separates two of Japan's main islands, Honshu and Kyushu. The channel has long been important to maritime transportation and cargo ships, as it connects the Sea of Japan and the Inland Sea. Passenger and car ferries link the port cities of Shimonoseki and Kitakyushu, as do trains and bridges. The battle between the U.S. and Japanese navies that presaged the Shimonoseki Campaign in 1863 took place here, and eventually led to Japan's opening up to Western powers. The cannons used during the campaign can today be seen near Shimonoseki’s port, where you can also dine at gourmet restaurants serving local delicacies such as fugu (blowfish), shop at venues like the Sea Mall, and connect with ferry service to Busan, in South Korea, and the island of Kyushu.The port at Kitakyushu (Moji Port) is equally historic and attractive, serving as a gateway to Honshu and Kyushu for centuries as well as an important international trade hub since the late 19th century. Although more industrial than Shimonoseki, it has many Western-style buildings, including the neo-Renaissance Mojiko Station, constructed in 1914, as well as other tourist attractions such as a developed promenade and the Kawachi Fuji Gardens. A highlight of the Kanmon Strait is an annual fireworks display—the largest in Japan—with more than 13,000 rockets fired from both sides of the strait. The spectacle draws more than a million visitors every August.

Located on the shores of the Sea of Japan, Kanazawa is a bustling hub with ships arriving and departing for South Korea, Russia and China. The port is just west of the city center—a former samurai town that was once one of the largest in Japan. Like Kyoto, the city escaped bombing in World War II, and its historic buildings provide a glimpse of old Japan. Of the three teahouse (chaya, in Japanese) neighborhoods, the most famous is the charming Higashi Chaya District. Contemporary Kanazawa has its attractions, too. Sophisticated restaurants serve delicious Kaga cuisine, which highlights the bounty of the sea. (Kaga is the traditional name for this part of Japan.) Shops sell Kaga-nui pottery, Kutani porcelain and other handicrafts. Major sights include Kenrokuen—a 17th-century garden that is a high point of landscape design in Japan—and Kanazawa Castle and its park. At the Kanazawa Noh Museum, visitors can learn about Noh theater and storytelling, while the 21st Century Museum of Contemporary Art features both Japanese and international artists (it’s located next to Kenrokuen). Nearby, there are hot springs to bathe in and the natural beauty of the Japanese Alps, Hakusan National Park and Noto Peninsula National Park.

Enjoy the amenities onboard your ship. Pool, Fitness Centre, Sports Courts, Spa and Salon, Activities and Entertainment program or just relax and enjoy the scenery as you sail by - perhaps with a cocktail.

Off-limits during much of the Soviet era, Vladivostok is perhaps best known as one end of the Trans-Siberian Railway and—at least among Russians—for its many hills, which leads to comparisons with another city by the sea, San Francisco. But Vladivostok, nestled in the hook-shaped Golden Horn Bay that lies between two large gulfs, hasn’t even been Russian all that long. It was ceded by the Qing dynasty in 1860 through the Treaty of Peking, when it was only a small Manchu fishing enclave (which explains why the local cuisine reflects strong Chinese, as well as Japanese and Korean, influences). By the early 1900s, Vladivostok had grown past its phase as a military post and into a truly international port, drawing people from around the world—including Yul Brynner's grandfather, for one, who had arrived from Switzerland. During that boom time, the city rapidly filled with theaters, music halls and other fine buildings that still stand, as do the tramways linking them. The arts continue to thrive: Today, the brand-new glass-and-steel Primorsky Stage is a branch of St. Petersburg’s Mariinsky, while a Hermitage Vladivostok is due to open soon. A statue honoring Vladivostok's famous native son Yul Brynner, who was born here in 1920, was also recently erected.

An odd thing about Japan is that the people of this island country used to be horrified that there was a deep ocean all around them. (They have clearly gotten over it—today Japan’s navy is one of the five most powerful in the world.) Hundreds of years after the Polynesians had sailed to and settled impossibly distant islands, the Japanese were still mostly running rowboats not unlike the slave galleys from old Sinbad movies. A 1780s map from the voyages of French explorer La Pérouse shows the route his ship took to explore Japan: He’d get in close, map a few miles, the samurai would row out and he’d calmly sail back into deep water, popping in to map the shore again a few miles later. This long-held fear makes Otaru all the more interesting: The city is where the Japanese began to venture further out to sea. Otaru grew and flourished on the cargo brought home by ships that had dipped below the horizon. The town was, for a while, Asia’s herring capital—herring on every plate for breakfast, tons of herring. Thus Otaru is where the foolhardy proved even the deep and scary ocean has its attractions. And just how snug you can make a home financed by fish.

If Japan ever had a wild west, it was Hokkaido. Oh, all the classic movie stuff of samurai bashing each other with swords never made it this far north, but the image of the West—open spaces, places to disappear, actual land horizons (which no other island in Japan has)—lingers.

Hokkaido's remoteness is so legendary that it figures into one of Japan’s most important historical tales: After losing a battle in 1189, good guy Minamoto Yoshitsune managed to escape capture and death by heading to Hokkaido (no one felt like chasing him that far). In one version of the story, he returned from Hokkaido to the mainland and, if you give alternate readings of the characters in his name, became Gin Ke Ka—Genghis Khan.

Hokkaido is the only spot among Japan’s primary islands where a non-Japanese culture manages to survive relatively intact, at least as an identity if not a lifestyle. The Ainu were here first, and are fairly easy to recognize; they have paler skin and more hair than ethnic Japanese. Cornerstones of Ainu culture remain, too: ceremonies that include sacrificing a bear (not often—bears are rare, although, this being the wild west, there are still some out there), the beautiful attush robe, a dislike of uncooked fish. And they’re not going anywhere. In 1997, the Japanese government finally recognized the Ainu's right to their own culture. Get a taste of that unique culture in Hakodate, the capital city of this northern island.

Until the mid-19th century, Japan lived in isolation, closed off from the rest of the world, and Yokohama was a mere fishing village. But in 1853, American naval officer Matthew Perry demanded the country open to foreign trade, and Yokohama was changed forever. The city quickly emerged as an international trading center, and while today it is often overshadowed by nearby Tokyo, it continues to be one of Japan’s liveliest, and most international, destinations. With its microbreweries and international restaurants, Yokohama has a decidedly different feel from many other Japanese cities.

From Yokohama, it’s a quick trip to peaceful Kamakura, home to Daibutsu, Japan’s second-largest bronze Buddha, and to the important Shinto shrine Tsurugaoka Hachimangu. Head to Hakone National Park on a clear day and you’ll be rewarded with picture-postcard views of majestic Mt. Fuji.

Tokyo is the largest city on earth and packed with some of the world’s best shops, museums and restaurants, big and small. While the bright neon lights and the bustle of contemporary Tokyo may be what comes to mind when you think of the city, there is another side. Tokyo's historic gardens and neighborhoods of traditional homes on narrow lanes speak to a timeless Japan that has survived into the 21st century.

Taxes, Fees and Port Expenses
Meals onboard
Select beverages onboard
Onboard Activities