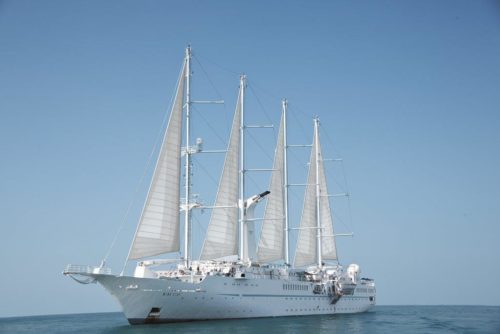 Experience the essence of small ship sailing aboard their 310-guest flagship, Wind Surf – the world’s largest sailing vessel. Or consider sailing on the luxurious 148-guest Wind Star or Wind Spirit.

Come sail to some of the world’s most enchanting ports with the most unique luxury cruise line at sea. Visit secluded coves and hidden harbours in many areas of the world.

Sail the Atlantic coast of Europe from Dublin to Lisbon. Or perhaps see the magic of the Rivieras – Spanish, French and Italian. See Morocco and the Canary Islands, or the Greek Islands and Turkey.

As Windstar Cruises became popular in the small ships sailing market, it became evident that the fleet had to be enlarged. This was accomplished with the acquisition of the all new, all suite Star Pride, Star Breeze and Star Legend. These are all motor yachts, each with a capacity of 212 guests. The nautical tone on board is enhanced by the colours, wooden floors, shutters and clever touches to accentuate the feeling of being at one with the ocean. 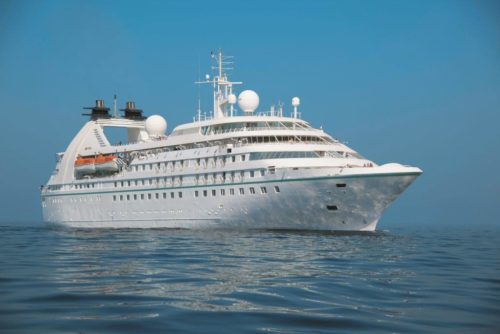 One of our most memorable vacations was aboard the Wind Surf, on a Mediterranean cruise from Barcelona to Rome – Islands of the West Med. Any sadness at departing the fabulous city of Barcelona was soon dispelled by a magical Windstar sail away, with everyone on deck in the glorious Mediterranean sun, raising a toast to the start of a new adventure. Every morning would bring us to a different island port, often in a different language.

Our first 2 visits were the Spanish Balearic Islands. Menorca – the low-key island, and Majorca the more vivacious sister. However here the natural beauty and history blended harmoniously. The days were filled with sightseeing, shopping and relaxing at outdoor cafes. In the evening back on board, casual delicious dining with open seating was available in the dining room or at any outdoor dining areas. After dinner the favourite place to relax was the Compass Rose lounge with live entertainment at indoor or outdoor seating.

The next day at sea gave us time to become acquainted with the ship and onboard activities, and plenty of time to relax and soak up the dazzling sun. 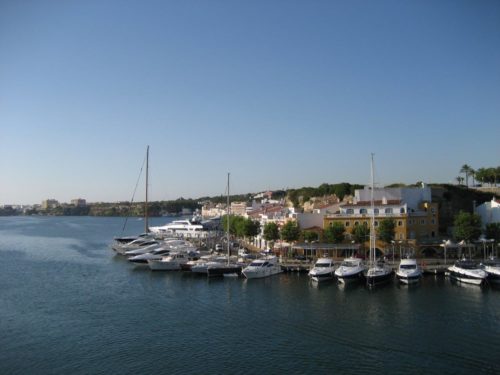 After settling into the Spanish way of like, we awoke the next morning in Alghero on the Italian Island of Sardinia. Passengers were tendered into shore, which allowed the decks to be opened for water sports on the rear of the ship in the deep waters of the Mediterranean. Sardinia is a beautiful rugged island known for rocky vistas. It is also known for seafood. After exploring Alghero and area we return to be tendered back to the ship for an evening onboard as we sail overnight.

The next morning brought us to Porto Vecchio on the French Island of Corsica. For many destinations, Windstar can dock in smaller ports, but Porto Vecchio is located on a rugged coast and the old town is up on the hill. Windstar has a free shuttle into town and returning back to the ship. Corsica’s claim to fame is being Napoleon’s birthplace, but there is also much to see – such as historical buildings, galleries, shops and outdoor cafes.

The last morning we arrived at the Italian Island of Elba, in the town of Portoferraio, which is best known as Napoleon’s first place of exile. However, there is much history, culture and beauty to be found here. Later in the afternoon we prepared for our farewell sail away as we made our way to Rome and the next adventure!

These smaller islands and ports of the Mediterranean are just an example of the types of itineraries to be found on Windstar, with their smaller ships allowing access to many more intimate destinations such as the following:

The Folklore of Psychedelic Cumbia and Chicha Music
Travelling across Canada - a trip down memory lane!